About the Sheriff's Office

Our Department of approximately 56 merit deputies has provided service and protection since 1823. The Johnson County Jail staff includes approximately 60 male and female correctional officers and staff members trained in first aid, cell extraction, and various forms of conflict resolution. The Jail is designed to hold 292 inmates.

The Investigations Division includes 11 detectives; some of those detectives are devoted specifically to Narcotic Investigations. The Sheriff’s Office Crime Lab Technician works closely with the Detectives to obtain, examine, and store evidence. 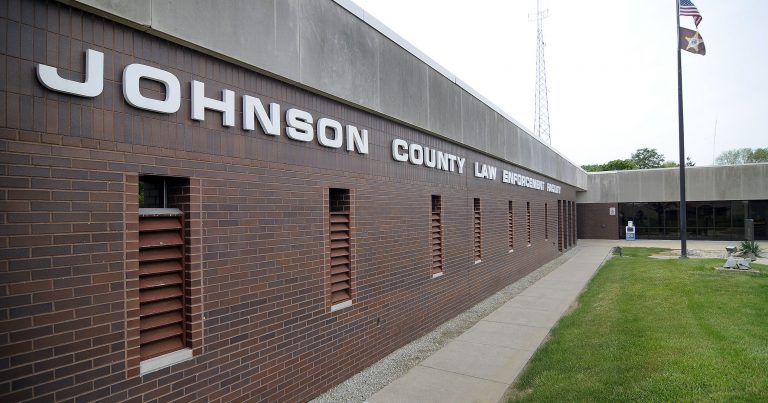 The first government official in Johnson County was the Sheriff. Governor Hendricks appointed John Smiley to the office of Sheriff. Sheriff Smiley served from 1823 until 1827. As the pioneer of Johnson County Government, Sheriff Smiley opened his home for government meetings and proceedings in 1823 as there were no government buildings. Sheriff Smiley lived at Greensburg Road and 700E at Smiley’s Mill. Smiley was forced to be innovative about how to enforce the law with such limited resources; It is recorded that Sheriff Smiley once chained a prisoner sent from the Edinburg Justice’s Court to a stump in the public square for his allotted time before there was a jail. Smiley was buried within feet of his old home on what is commonly referred to today as 700E north of Greensburg Road on the west side of the road. His grave rests against a fencerow near a large tree.

Criminals and lawbreakers have been recorded since the birth of record keeping. The first recorded fight in Johnson County occurred at the first election on Blue River at the Hezekiah Davison residence – and can you imagine that alcohol was involved? The first keg of Whiskey ever brought to the county was being consumed. William Williamson, a candidate for Clerk of the Circuit Court, provided the whiskey. The whiskey was free to all voters during the day. Many voters became intoxicated and a large fight erupted. According to an account of the incident, “the citizens beat, bit, scratched, gouged each other, and wallowed in the mud.”

Unfortunately, more serious crime was also prevalent.In the fall of 1867, John Patterson and Henry Hatchell became intoxicated. The two greedy men had heard that a Pleasant Township man who lived nearby had just sold an animal for $70.00. They decided to go rob the man. During the robbery, they killed the victim. The suspects fled to a saloon near the stockyards and recklessly spend their money. Not long afterwards they were apprehended by Sheriff Capt. William A. Owens. Hatchell confessed the crime to Owens on the way to the Jail. The two men were incarcerated in the jail. The cell that held them was secured by a lock twelve by sixteen inches in size; The key that opened the door was one foot long. As residents of Pleasant Township heard of the popular man’s murder, they began conspiring to take the law into their own hands.

On October 31, 1867, an angry mob of Pleasant Township citizens traveled to the Jail in Franklin. They forced entry into the building and obtained supplies from Turner’s Blacksmithing Shop. They beat the huge jail cell lock until it finally broke open. The angry mob marched the men back up north to a Beech tree in Lysander Adam’s woods where they hung them. These are the only recorded hangings in the history of Johnson County.

Those individuals who desired to run afoul of the law after dark had free reign to do so, until 1954 when Sheriff Bob Maxwell instituted the first regular Night Shift patrols by Johnson County Sheriff’s Deputies.

In 1826, the Johnson County Board of Justices recorded making allowances out of the county treasury for the guarding of prisoners. It was in that year that the first jail was built. Johnson County Jail #1, a log structure, was built by Samuel Herriott. A construction order was issued in May of 1826: “the contractor for building a jail in Franklin in place of putting but one window in each story seven inches by three feet, put two windows in each end, seven inches by eighteen inches, and in room of making the logs for said jail eighteen feet long they be seventeen feet and in place of sealing the upper loft with three-quarters inch popular plank it be laid down with hewed timber nine inches thick.” This jail served until 1833 when the Johnson County Board of Justice’s determined that a new jail was needed.

The Board of Justice’s published notice that the lowest bidder would be charged with the moving of the jail “from the site it now occupies to the southeast corner of lot 56, also the fencing off on said lot a stray pen of posts and rails and putting a good and substantial gate to the same.” This jail was built and used until 1838 when a prisoner set fire to the building and it was burned to the ground. It was recalled that the prisoner was badly burned by the fire of his own setting, but in the excitement incident to the fire he managed to make his escape.

A new jail was erected by Samuel Harriott in the same location as the old jail and was opened in November of 1838 at a cost of $500.00. It was a secure facility; The walls were three courses of logs. The middle course was vertical and the other two were horizontal. The “creditor’s jail” occupied the second story room. In the middle of the floor on the second floor was a trap door through which the criminals by way of ladder were conducted to their cell on the first floor. The ladder was then removed and the trap door was fastened above them. In August of 1850, the County Board decided that a new jail should be built.

This brick jail was completed in 1851 at a cost of $4,800.00. The Sheriff’s residence was attached to the structure. The building was two stories high and faced east on the southwest corner of the public square by the courthouse. A hot air furnace of brick built into the structure heated the building. This building served until it was replaced in 1867.

The county acquired the title to lot 54 for $1,600.00. The lot is located on the northwest corner of West Court and Madison Streets in Franklin on the public square. The new jail was built for $39,900.00 and was completed in 1867. It was modeled after the jail in Danville, Indiana. This structure served for many years. In 1965, the structure was considered crowded and very obsolete. This building remained until it was razed in 1980.

Jail #6 was built and dedicated in 1977. This building was moved away from the courthouse square to county owned property on the south end of Franklin. Located behind the Johnson Memorial Hospital and adjacent to the County Highway Garage, the Johnson County Law Enforcement Center houses the Jail, Sheriff’s Administration, Emergency Management Office, and the 9-1-1 Emergency Communications Center. This building still stands today. In response to a federal overcrowding lawsuit, the jail facility was gutted, remodeled, and a new wing was added in 2002. The capacity was raised from 104 beds to 299 beds. A jail management committee was formed to monitor the inmate population and attempt to keep the jail population reasonable.

Past Sheriffs of Johnson County

* Note: The dates listed are approximate; many of the older records researched were incomplete or conflicting.